The post popular image of the Cult is the Black Santa Muerte. This color is used for protection and to perform black magic. The statue has 13cm in height and it is made of resin, crafted devotionaly by Hand in México City.

Category: SANTA MUERTE
Get 10% off on sterling silver items and get early access to new releases by purchasing VIASINIESTRA MEMBERSHIP!

Only logged in customers who have purchased this product may leave a review.

The post popular image of the Cult is the Black Santa Muerte. This color is used for protection and to perform black magic. The statue has 13cm in height and it is made of resin, crafted devotionaly by Hand in México City.

Santa Muerte is a figure considered sacred and “miraculous”, a symbol present in the history of man, which “people sanctify and consider a living being that listens and fulfills requests”. Iconographically, it is possible to find her represented as a totally emaciated human skeleton dressed in a tunic, carrying a scythe – an agricultural instrument to reap crops, an ancient metaphor of the one that reaps and collects lives, one of the four Horsemen of the Apocalypse – symbol of time and the cessation of life-, and on the left a world or terrestrial globe.

Black Santa Muerte is the most popular image, but you can find figures and images dressed in red, white, purple, green or with the colors of the seven powers, reminiscent of a rainbow. In the same way, the way of representing her varies, since she can be standing, sitting on a throne, riding a horse.

Believers in Santa Muerte define her as a benevolent spiritual being that provides protection and fulfills different requests, most of them related to life-threatening situations or difficult problems, such as recovering from illness or getting out of jail. What was promised to Santa Muerte must be fulfilled, because otherwise the spiritual entity can get upset and take revenge against those who falsified their words. Probably the popularity and adoption of this cult by a growing number of people, based on the proliferation of public altars in different cities of the country, is due to the meaning that the figure has, because although the existence of God may not be certain for many, something sure in this life is death.

Open chat
1
Hello! Need help?
Hello! How I can help? 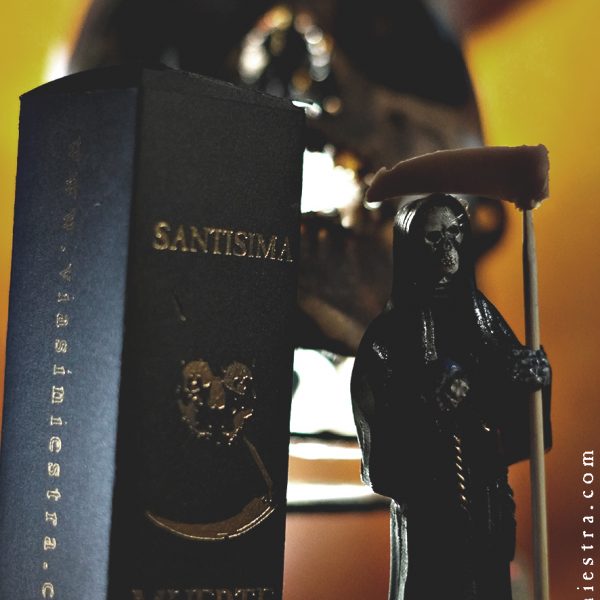